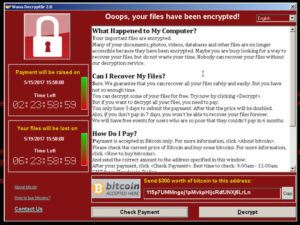 The WannaCry ransomware that swept the globe on Friday has proven so malicious that Microsoft has issued patches for Windows versions dating back as far as 14 years.

Late Friday, emergency security updates were released for Windows XP, Windows 8, and Windows Server 2003. Links to the updates can be found in Microsoft’s announcement.

Microsoft admitted the move was “highly unusual” because the three operating systems are no longer officially supported. XP support, for instance, ended more than three years ago.

Microsoft says it decided to patch the outdated systems “with the principle of protecting our customer ecosystem overall, firmly in mind.” As with biological viruses, unprotected machines often become threats to other users as computer malware spreads, for instance by generating spam emails. While Microsoft is warning users to protect themselves against WannaCry by taking caution when opening email attachments, security firm Symantec warns that WannaCry is also spreading “within corporate networks, without user interaction.”

The extent and severity of the WannaCry attack has been nearly unprecedented, hijacking systems from hospitals in the U.K. to phone operators in Spain. Systems across nearly 100 countries are known to have been affected so far. Though researchers have found a “kill switch” that seems to have hampered the software’s spread, the attack is widely expected to continue in modified form.

WannaCry, also known as WannaCrypt or Wanna Decryptor, is reportedly based on exploits developed by the U.S. National Security Agency before being stolen and leaked by a group called the Shadow Brokers in April. Up-to-date Windows 10 systems were already protected from the attack.